We got a collaboration of Yggdrasil Gaming and DreamTech right here! Brawl at the Red Cap Inn is a video slot with a 5×4 grid x2. Set in the medieval era with a touch of fantasy, this slot has a 96.04% RTP and high volatility.

Brawl at the Red Cap Inn has double pay lines and a lot of overflowing beer mugs being thrown in the game! With high volatility and RTP, this game also has a high maximum payout which can increase up to 9,674x your bet. Of course, there are Wilds, Scatters, Bonus Spins, and more features throughout the gameplay.

Check out the best Yggdrasil Casinos where to play Brawl at the Red Cap Inn slot. 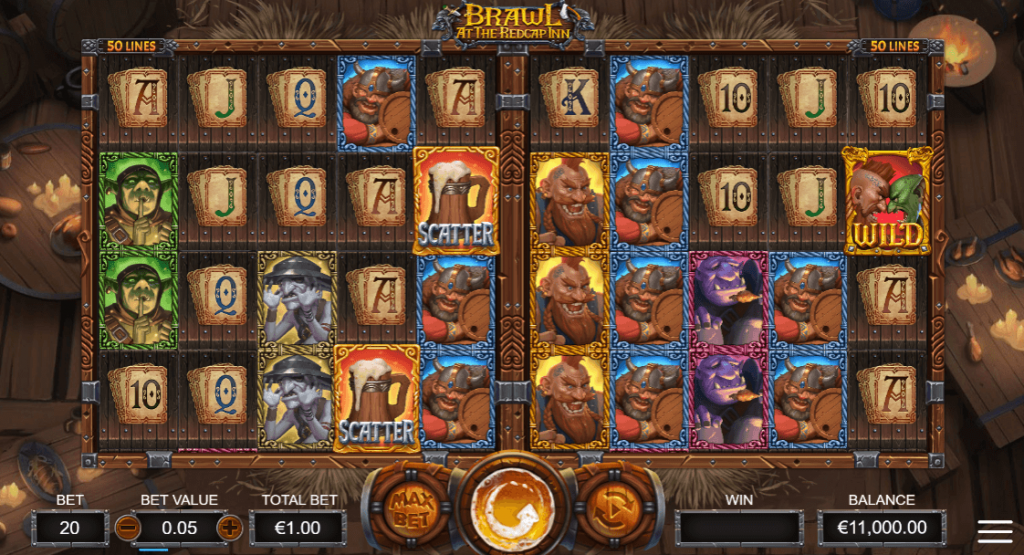 Brawl at the Red Cap Inn is a video slot with a terrific design. It has that combination of medieval and fantasy themes that can wake up your primitive instincts in the game. Since this is a collaboration between Yggdrasil Gaming and Dreamtech Gaming, you can expect its high-quality visuals and sounds. The developer incorporated a soundtrack that will take you to the Middle Ages without electricity, gadgets, and other fancy things.

Brawl at the Red Cap Inn offers 2 bonus features in its grid with 5 reels and 4 rows. But unlike normal grids, the reels and rows of this slot are multiplied by 2 to display more symbols. This means that the chances of forming a winning combination are also bigger since more symbols can land.

The Wild Swap is a feature that you might see multiple times in this game. This feature can be triggered by landing a Wild symbol on any of the grids that are split into 2 sets. A wooden beer mug will be thrown each time a Wild symbol lands on the grid. At the same time, these mugs can hit a position on the opposite set of grids to trigger more action in the gameplay.

All affected symbols that are hit by the thrown beer mug will then transform into Wild symbols. These Wild symbols are represented by 2 angry characters in a face-to-face position that can replace other symbols. But things can be more exciting if you land a pair of Wilds in the same position on the 2 sets of reels. In this case, the Wild symbols that landed will turn into 5x Multiplier Wilds to boost your payouts.

For the bonus round, you will need the help of Scatter symbols. To activate the Held Wild Bonus Games, you need to land at least 5 or more Scatter symbols. The scatters can land across the two sets of reels to get 10 Bonus Spins as your rewards.

In this round, the Wild Swap feature is also active not just in the base game. This means that your chances of forming winning combinations are even higher once the Held Wild Bonus Games are triggered. At the same time, you also have a chance to land the 5x Multiplier Wild which is attached to the Wild Swap feature.

One of the best things in the bonus round of Brawl at the Red Cap Inn is its boost during the Bonus Spins. The Wild symbols in this round will become Sticky symbols each time they land on the reels. This applies to the regular Wilds and 5x Multiplier Wild symbols that can appear anytime and remain in their positions. The Sticky symbols will remain on the reels until you used your Bonus Spins.

But the best part of this Held Wild Bonus Games feature is that it can be retriggered. If you land 5 or more Scatter symbols during the Bonus Spins, this feature will be retriggered. Therefore, you will get another set of 10 Bonus Spins that will be added to your total Bonus Spins.

Brawl at the Red Cap Inn RTP, betting and prizes

Compared with other regular slot machines, Brawl at the Red Cap Inn has 2 sets of separate reels. Each set of the grid has 5 reels and 4 rows that come with 50 pay lines. This means that this game has a total of 100 pay lines (50 + 50 pay lines). To create a winning combo, you just need 3, 4, or 5 matching symbols that are paid from left to right. The pay line starts from the leftmost reel on any of the reel sets.

To start, you need to bet a minimum of £0.20 up to a maximum of £40 on each spin. You can also adjust your bet using the + and – buttons on the Total Bet box below the reels. Looking at the paytable, all rewards are displayed in cash which depends on your bet per spin. Just click the symbols if you want to see their value.

Brawl at the Red Cap Inn is a highly volatile game that is designed with a 96.04% RTP. This average RTP is paired with 36.38% hit frequency so the winning combinations may land on about 1/3 of your spins. With the maximum bet and gameplay features, Brawl at the Red Cap Inn can pay you up to 9,674x your stake. This can be equivalent up to £368.960 when paid in cash.

For a game with a medieval theme, Brawl at the Red Cap Inn is entertaining to play. It has that primitive punch through its high-definition graphics and design. Of course, it has some cool animation to match its overflowing rewards that are also incorporated with its features. We also like that its Wild symbol can also replace Scatter symbols that are commonly untouchable in other slots.

This increases your potential of hitting a winning combination throughout the game. Moreover, we like its unique set of reels that are divided into 2 since you won’t encounter games like this regularly. Since Brawl at the Red Cap Inn is a high variance game, it also has an impressive RTP and jackpot prize. Lastly, this game is great for those who like Bonus Spins that can be retriggered too.

What´s the RTP in Brawl at the Red Cap Inn slot?

Which game provider released Brawl at the Red Cap Inn?

Brawl at the Red Cap Inn was develoved by Dreamtech Gaming and it was released by Yggdrasil.

What´s the volatility in Brawl at the Red Cap Inn?

Brawl at the Red Cap Inn is considered as high volatility game, which means that winnings may come less frequently.