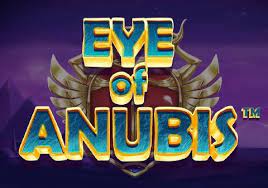 Released by Playtech and created by Ash Gaming, Eye of Anubis is the video slot to watch out after the Curse of Anubis. This is the sequel you wouldn’t want to miss in the series of slot machines from Playtech. Inspired by Ancient Egypt, Eye of Anubis is a collaboration that includes Cluster Pays and lots of gemstones. This highly volatile slot is set in an 8×8 grid with 95.76% RTP. With the maximum bet, you can win up to 10,000x your stake.

Eye of Anubis is a video slot with tons of symbols that has a total of 64 in each spin. From its name alone, it is easy to identify its theme which is inspired by Ancient Egyptian Mythology. Checking out the grid, this slot doesn’t have a lot of special symbols and characters on the reels. Instead of using the usual Egyptian characters and symbols, the developer opted for gems in this game.

The slots on the reels are just occupied by repetitive symbols that are composed of gems in different colors and sizes. There are 6 types of gems in the reels that are joined with the Scarab Wild symbol. This gave it a unique touch compared with other slots with the same theme. Although the symbols are not that striking, Ash Gaming made sure that its overall design and approach are satisfying enough.

Eye of Anubis has a surprisingly small grid even though it has 8 reels and 8 rows. For a game with up to 64 symbols in every spin, Eye of Anubis’ grid could have been a little bigger. After all, there is still lots of free space in the background. When it comes to the gameplay, this slot has a Wild symbol that functions as a modifier to trigger actions.

Aside from the Wild symbol, it also has more features to watch out for like the Collapsing Reels, Multipliers, and more.

Starting with the base game, let’s take a look at the Wild symbol that triggers more action in Eye of Anubis. The base game centers on the Wild symbol which is represented by the Scarab icon. This Scarab Wild symbol can land on the reels as part of other clusters of symbols or as a substitute. This means that it can replace other symbols on the reels to form a winning combination. To justify the importance of the Wild symbol, it also functions as a Scatter symbol to activate another feature below.

Once you form a winning combination, you will get paid right away. At the same time, the Collapsing Reels feature will be triggered next to remove all winning symbols in the grid. Once all winning symbols are eliminated from the reels, new symbols will automatically fall to occupy all vacant positions.

With the new symbols, new winning combinations may form in the grid and give you a big reward. As long as there is a new winning cluster that forms, the Collapsing Reels feature will remain active. But that is not the only benefit that you can maximize once the Collapsing Reels are triggered. This is also connected to another feature that we already discussed above: the Scarab Wild symbol.

Once the Scarab Wild becomes a part of a winning cluster during the Collapsing Reels feature, it will get a boost.

As mentioned above, Eye of Anubis also got more under its sleeves and those are the Bonus Spins. The Bonus Spins round is the major feature of this game that you might enjoy if you are a sucker of freebies. After all, Bonus Spins can increase your chances of hitting the winning combinations aside from increasing your game time.

Unlike the usual Bonus Spins features in slot games, this feature is not triggered by the Scatter symbols. Besides, Eye of Anubis doesn’t have a separate Scatter symbol so this is an additional perk of having Wild symbols around. In this game, it doesn’t matter where you can get the required number of Scarab Wild symbols. There should be at least 3 or more Wild symbols in view during the same spin sequence to trigger the bonus round.

This bonus round gives 6 Bonus Spins to extend your game time. Also, the Multipliers that you can get from the triggering Wilds will be added in the Eye of Anubis that will be displayed above the grid.

Eye of Anubis has a Cluster Pays system that is employed in the gameplay to create new winnings. The game accepts an impressive betting range which starts with a minimum amount of £0.10. To get bigger wins and maximize the rewards, you can increase your bet up to £500 on each spin. To adjust your bet, just tap the + and – buttons in the “Total Bet” box below the reels. The amounts in the pay table are also displayed in coins.

These are divided by 10 if you want to see how it relates to your total bet on each spin. When it comes to the level of volatility, Eye of Anubis is classified as a high variance game so the risk is high. On the other hand, this also means that its maximum on each spin is higher compared with medium and low variance slots. You can experience the impact of this volatility in the bonus round once you activate the Bonus Spins.

Using the maximum bet, you can win as high as 10,000x your stake in Eye of Anubis. Its RTP is set at 95.76% only which is lower than other average slots. Still, you can rely on its high maximum win per spin which matches its high volatility. To win, you just need at least 5 or more matching symbols. But for better rewards, you need 25 or more matching symbols in a winning cluster. Depending on the gem you land, these are the possible rewards you can get from a cluster of 5 to 25 or more:

All winnings in this game are multiplied by your coin value. You can play this slot with 10 coins between the set betting range.

Eye of Anubis is an interesting game that is created by Ash Gaming and released by Playtech. Despite its not-so-original theme, its features still made it appealing enough for players who are into highly volatile slots. Eye of Anubis can give you huge rewards since its maximum jackpot can reach up to 10,000x your bet. But if you are very keen on RTP, this game is on the lower side not unless you round off its percentage.

What´s the RTP in Eye of Anubis slot?

Eye of Anubis comes from Ash Gaming, but it was released by Playtech.

What´s the volatility in Eye of Anubis?

Eye of Anubis is considered as high volatility game.